HOBART’S DERWENT RIVER - WHAT LIES BENEATH

I did a night dive in Hobart's Derwent River, a few night's ago.  This is something I've wanted to do for a long time, but the logistics seemed too hard.  When I heard the Tas Uni Dive Club had an event planned, I joined them for this unique opportunity.

For those of you not familiar with the Derwent, it's a victim of industrial pollution.  For many years considered a nasty, toxic place, there's been a great improvement in the health of the estuary in recent years; thanks to an increased community awareness of the environment.


HOBART’S DERWENT RIVER - WHAT LIES BENEATH...

It’s a Tuesday night in Hobart.  The rush hour is over and diners are enjoying their restaurants.  It might be early spring, but it’s still too chilly for many people to be out and about.  Those who are, huddle against the cold, hurrying to their destinations.  Lined up on the end of a wharf are seven divers.  One at a time, they step off, splashing into the river.  The dark waters close over and they disappear from sight.  Underwater lightning surrounds the photographers and bubbles give a clue, but from the surface, their whereabouts is uncertain. 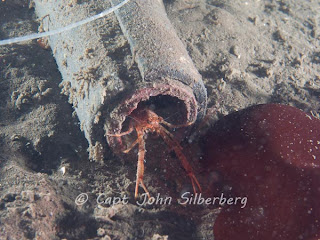 This is the Derwent River; so badly polluted nothing lives except the bacteria, surely there’s nothing there to see… right?  Wrong!  Instead, the divers find a seabed teeming with life.  Jewel anemones poke out of the silt, filtering nutrients from the water moving by.  Sea stars cover the rubble, and not just the north pacific variety, a healthy population of local star fish graze on algae and search for scraps.  Crabs hide amongst the rocks, their tiny feelers sweeping back and forth and dragging particles into their mouths.  Cowfish swim above everything. 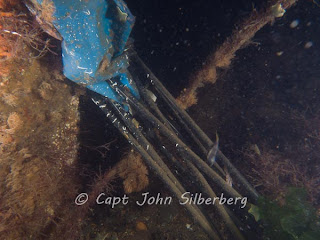 There’s a lot of rubbish on the bottom: a folding chair lies under the wharf; perhaps a frustrated fisher, unable to catch anything, sacrificed it to the gods of fishing.  Ironically, it’s tonight’s home for a couple of leatherjackets.  They shelter within the fabric, hiding from the noisy bubble blowing creatures descending to their world.  Beer bottles stick out of the rocks.  This is all reclaimed land and the rocks retain the earth behind.  Somehow, the bottles have become part of the wall.  Intact, but overgrown, hanging from their necks are seahorses; they are big and healthy.  A breeder once told me that a large crown indicates a happy animal.  I’m not sure of the science, but if it’s true, these are in heaven, with crowns to make any princess proud. 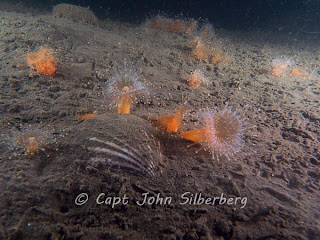 The seabed is grey silt.  Soft and easily disturbed, the divers take care to avoid stirring up the sediment lest it cloud their vision.  An alien landscape, flat and featureless, it’s home to creatures adapted to this bizarre environment.  Holes pock the seabed, each one a carefully excavated den, the shelter for a squat lobster.  Brilliant-orange jewel anemones blossom from the grey, their translucent tentacles capturing planktonic wanderers.  The blue-grey tentacular fan of a sausage worm retracts in the blink of an eye; extremely sensitive to pressure changes, the movement of a diver triggers its disappearance.  This landscape is alive, a unique ecosystem few can imagine. 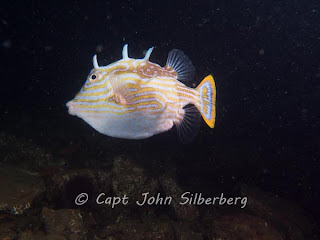 Back on the rock wall, Shaw’s cowfish try and hide from the divers’ lights.  Their striped body patterns are a gaudy display, easily spotted.  Like so many species, the male is brightest, clad in yellow and blue, while the female is demure in contrasting brown.  Old wooden piles jut out from the rubble.  The remains of old wharves, they are but a pale ghost of their towering stature in the old forests of Tasmania.

The water is cold.  At 11 degrees Celsius it’s warmer than the air, but the divers are soon chilled.  Back on land, the memory of weightlessness soon fades and the harsh reality of heavy gear and neoprene soon returns.

In the restaurants, the diners call for the bill.  They don their coats and rush to their cars.  They drive home, oblivious to the beauty of the river, and the wonder of what lies beneath…